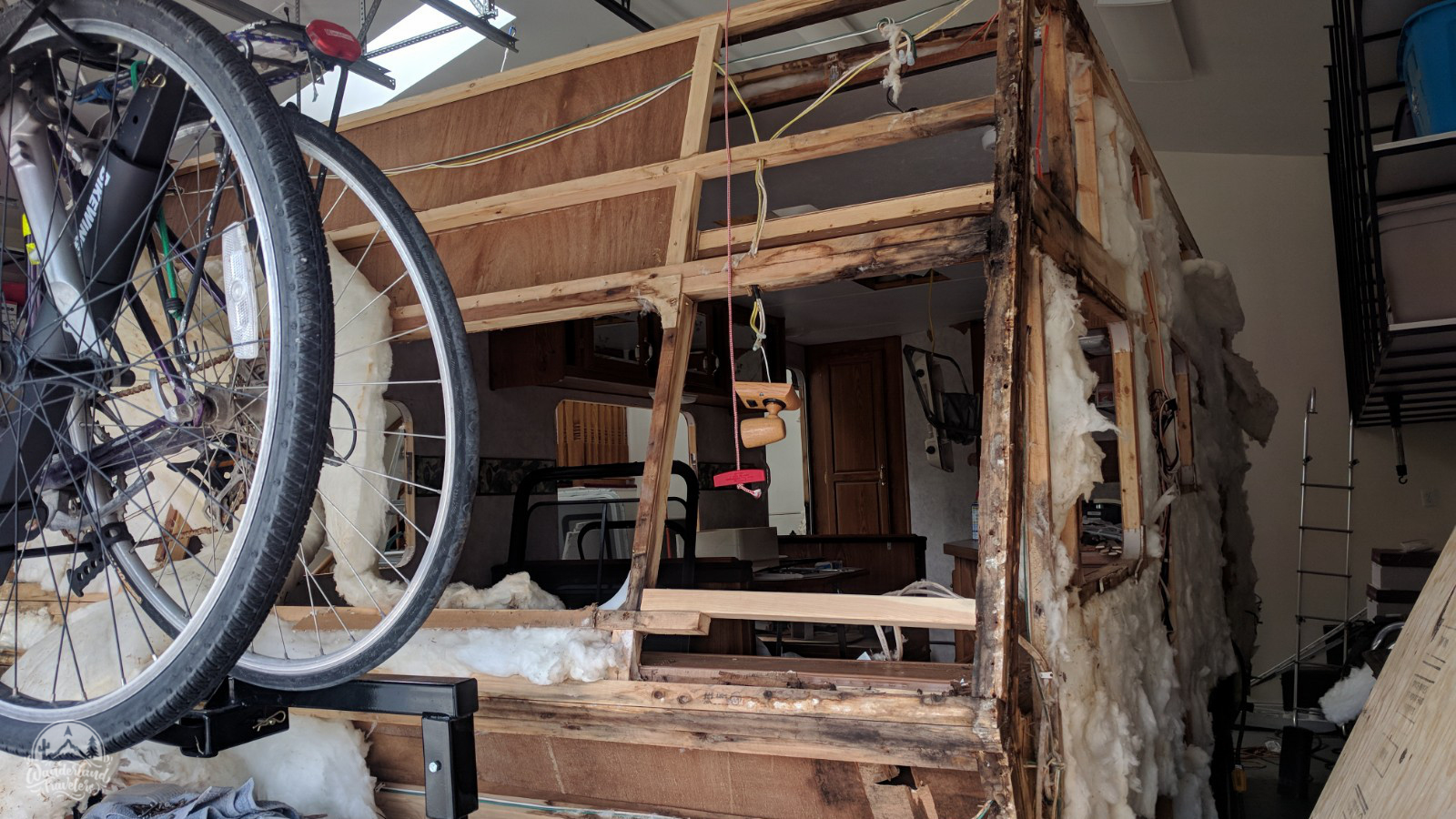 We purchased our travel trailer in Eugene, Oregon from the same dealership that we had bought our motorhome from 3 years prior. The trailer is a 2003 and Oregon is obviously known as being a wet and rainy place, so when we went to see it for the first time I took a deep breath to see if it smelled musty at all, it did not. We were so excited to find the make and model we had our heart set on that we probably didn’t give it the thorough pre-purchase inpsection that we will do from now on!

After moving on board and getting a closer look at things, I thought that some areas of the wall and ceiling looked like they had a small amount of water damage so I peeled back a little wallpaper and sent a spore sample to a local lab to see if there was mold present in the wall. It turned out that yes, there were mold spores on the sample I sent (I pressed a piece of clear tape against the discolored wall) – the man I spoke to let me know it wasn’t toxic mold, but it was definitely something that should be addressed and just because one area wasn’t toxic mold didn’t mean other water damaged areas might not be. This helped solidify our plan to head to Utah where we could park the trailer in Brad’s dad’s shop, air it out in that low humidity, and if needed, be able to open up the walls in a protected environment.

Amazingly, the shop had an attached apartment so we were able to move everything out of the trailer and have a space for ourselves and the dogs while we worked on the trailer.

Brad actually took a week off work so that we could dive into the project and with the goal of wrapping it up within a couple weeks. Oh how naive we were!

That first week was spent discovering and uncovering more and more areas with pretty severe water damage. Every corner of the roof was problematic and two opposing corners of the body were also pretty bad with interior and exterior damage. Underneath the rig, water had collected in the underbelly fabric, then the fiberglass insulation soaked it up and held moisture against the wood so there were a few section of really rotten wood (and mold growth) on the bottom as well.

There was definitely some initial shock and despair when we learned just how bad the damage was – it far more than we ever expected. Luckily we had access to an incredible shop, all the tools, and ultimately we felt like it was within our abilities to make the needed repairs.

We ended up having to remove all the aluminum siding. We also removed the rubber roof and we got to work replacing the damaged wood. We bought this moisture meter off Amazon and found that to be incredibly helpful to identify areas with high moisture. Sometimes all that was needed was to open the area up and expose it to air so it could dry out. Pro tip – we will never go RV shopping again without one!

We purchased Minwax wood hardener and Woody Wood Epoxy for wood that was compromised still good overall. We dug out any soft parts, applied the wood hardener and then filled in the missing area with the epoxy – which it claims to be as strong as real wood once it cures.

I make it sound straightforward but of course there were lots of little snags, surprises, and difficulties with removing the siding, pulling out hundreds of stubborn rusty staples, and digging out rotten wood and deciding what was salvageable.

While Brad focused on removing and replacing the rotten wood, I spent several weeks cleaning each and every aluminum panel. There was butyl tape and residue to be removed and cleaned (I cleaned with mineral spirits), and there was sometimes silicone caulk to remove which was more time consuming. Sometimes I scratched the paint trying to get all the gunk off, and there were rusty spots that also needed paint to prevent further corrosion – so after cleaning the panels I painted the compromised spots. There were even a few panels where rust had eaten all the way through the aluminum so I used a patch to fill that in before sanding and painting.

While we had the siding off Brad used his electrical skills to install new outlets, lights, fans, and outdoor speakers. With the roof off, we used the opportunity to put a skylight over the shower to give Brad more headroom…without it, he would have had to crouch a little to shower! We also hard-wired in a backup camera on the rear of the trailer and replaced all the running lights. We put on a brand new EPDM roof (that was a scary project!) and replaced the old ceiling vents with Maxx Air fans. And of course anywhere there was wet or compromised fiberglass insultion, we replaced that.

There were so many other side projects going on as well: fixing our front window cover, installing a TV mount, dealing with wiring issues, building the bed frame, installing laminate over our countertop, upgrading the kitchen faucet, closing up the underbelly with repair tape, cleaning the awning, and then my big project of prepping and painting all the interior walls and cabinets.

Having access to the air tools in the shop made reinstalling the aluminum panels so much easier than it would have been. And after that, we installed butyl tape around all the windows, doors, bay covers, exterior lights, roof components, and trim pieces. And then of course applied lots and lots of caulk.

Overall, it took us 8 weeks of non-stop work (well, Brad was working his 8-5, M-F job as well!) but we finally got it all put back together…and just in time to hit the road to make it to two weddings.

It was incredibly satisfying to finally bring this project to a close and drive away in water tight, renewly remodeled and upgraded rig – dang near a dream home for us.

Use the slider in the middle of the photos below to see the trailer transformation! 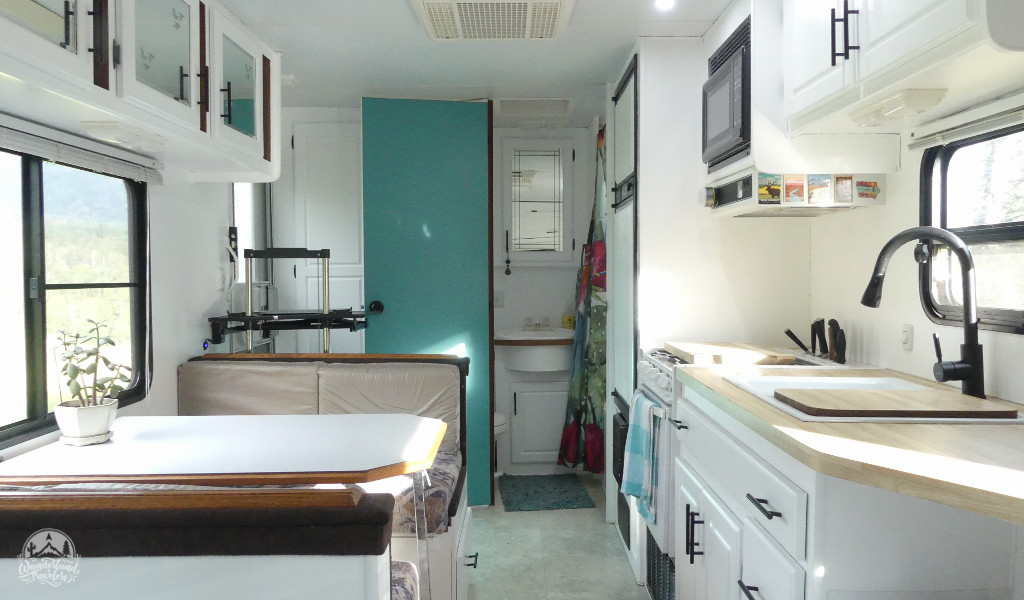 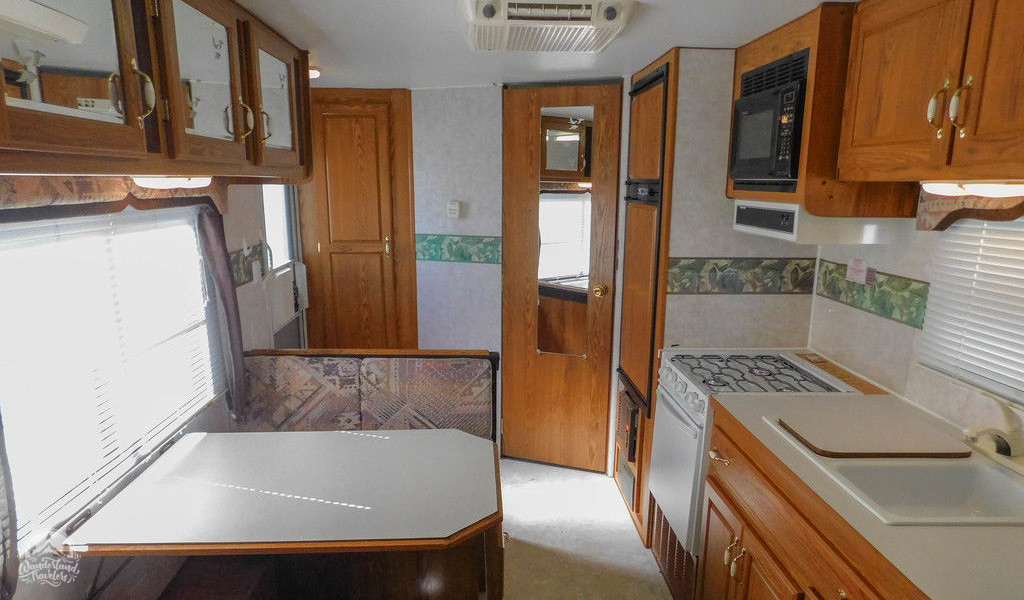 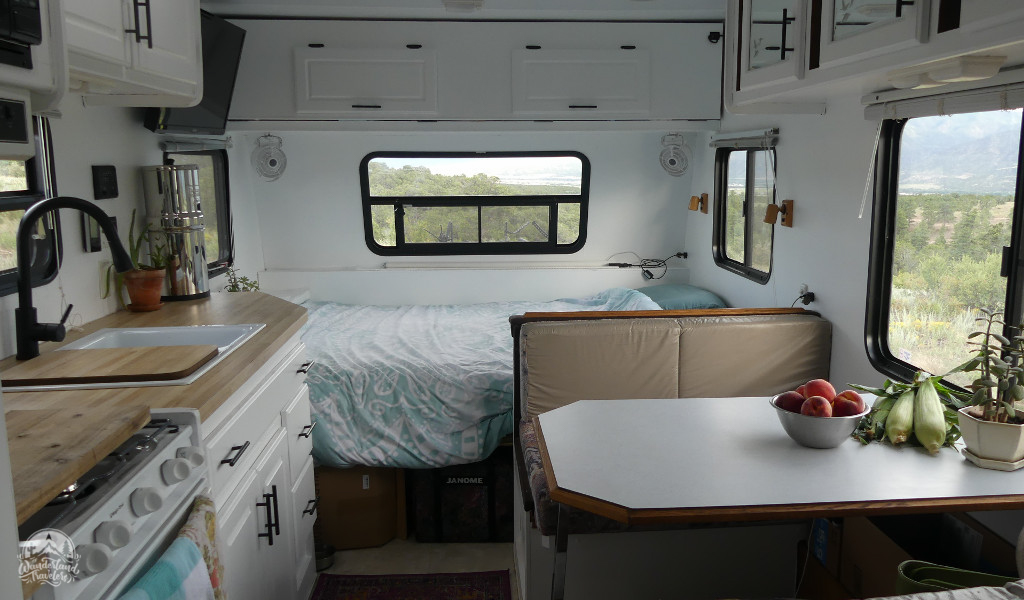 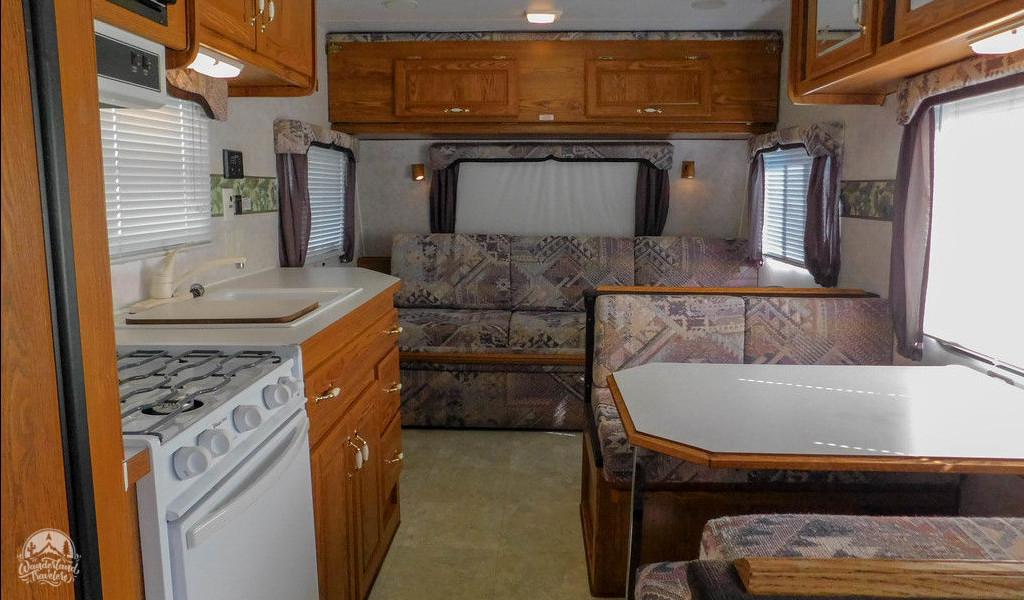 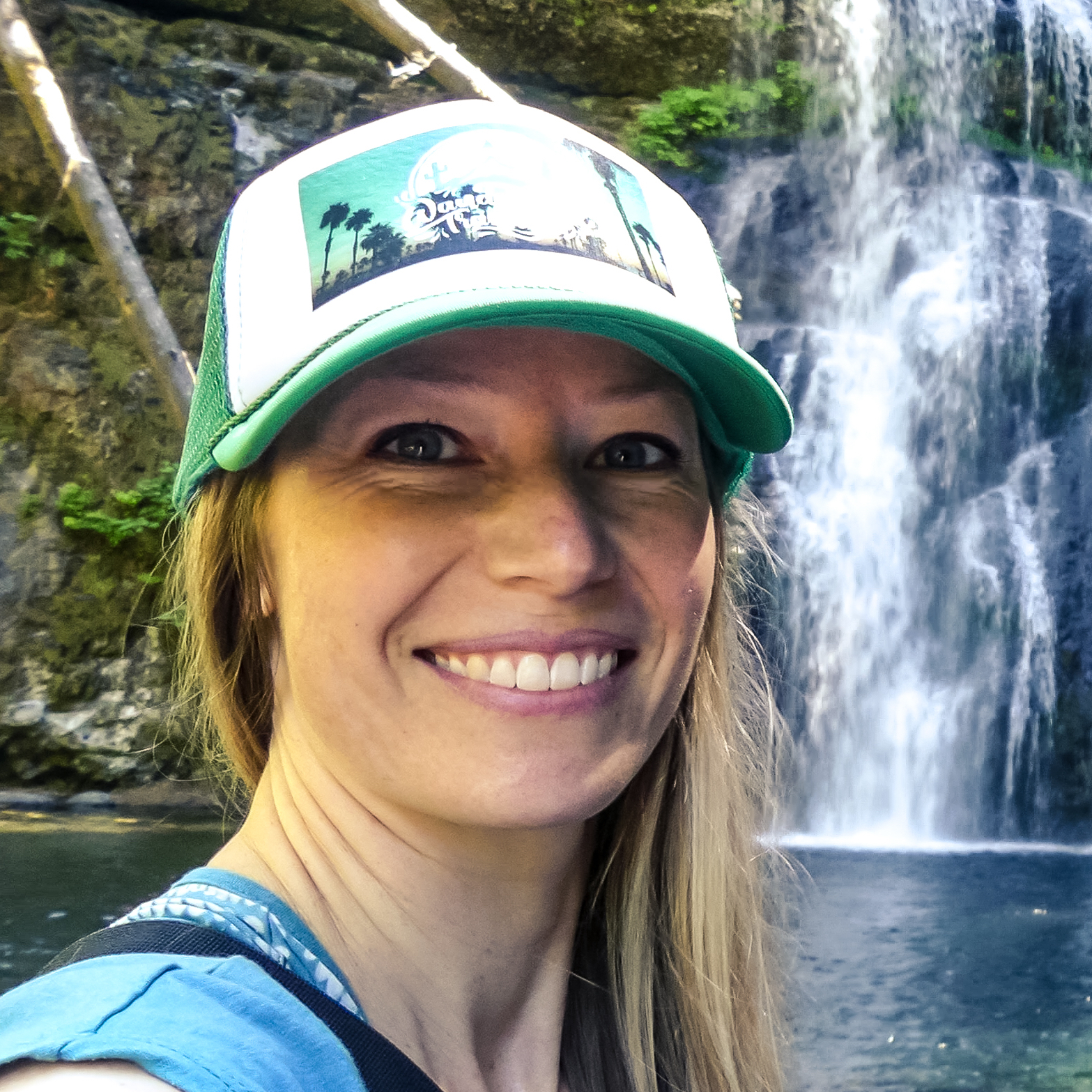 Hi, I’m Maggie! I enjoy exploring new cities but my real passion is spending time in nature. Hiking, kayaking, and photography all fill my cup to the brim, as does spending time with my sweet little family. We’ve been living and traveling in our motorhome since 2016 and it’s one of the best decisions we ever made. When I’m not scrambling up waterfalls or researching our next stop, I spend my time video editing for our YouTube channel, blogging and taking pictures – we love this way of life and have no plans to stop anytime soon! 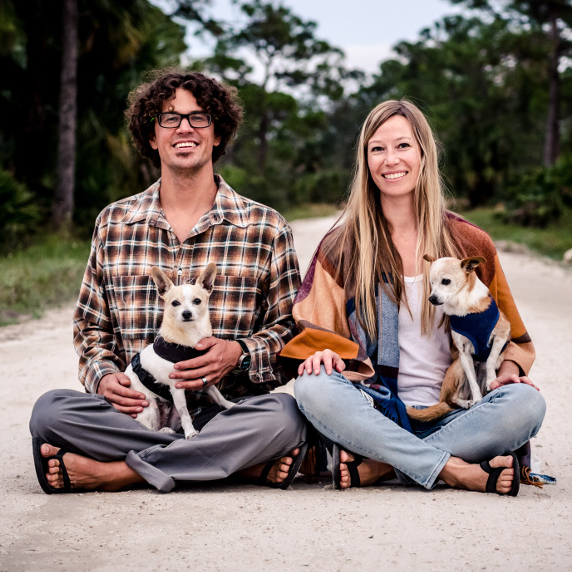 Hi! We're Brad and Maggie and we're just a couple of fun-loving adventure seekers who decided to start carving our own path. We moved into an RV and have been exploring incredible places across the US since 2016!